A few tips on crafting a good story...

As a writer, I've often been asked by other writers, "How do you know when a story is finished?" Well, I know when I have no more questions to answer. Then the tale I'm telling is done. When every issue that was raised in the story has been put to bed, then I know I've done my job.

But how does an author keep track of everything that needs to be covered, one might ask. Well, you could keep an altogether different document that lists points that should be made. Then you could cross off or delete them as they are entered into your work.

Won't that take forever? This may be another question on a writer's mind. Well, it may take a little while, but crafting a good story is not a sprint. It's more a marathon.

But then listing points of interest may change the initial tenor of the story, you might say. I agree. However, that's where edits and re-writes come in. I don't know about others, but I couldn't craft a great story without the twins, Editing and Re-Writing. If made proper use of, they can become an author's greatest friends. They can make a good story so much better. Often they will even add interest, intrigue and suspense. In short, editing and re-writes can turn a story into more than the author initially dreamed.

Also, as writers and authors we must look at our work as our readers will. Readers don't like it when we mention things and then don't clarify them. Therefore, we must make sure to mark and fix those things. Now I don't mean belabor a point, that can become boring. But it would be most unfair to leave the reader hanging --unless, of  course, a sequel is planned. Then that should be stated, clearly.

I feel the only time we can leave a reader hanging is when we're going to revisit a point. Yet even then we must create an atmosphere of suspense, so that the reader will instinctively understand that they are moving forward, toward something.

Below, I'll give you an example of what I mean. It is an excerpt from my latest novel entitled Improbable... It's available online at Amazon and Barnes & Noble. Do enjoy, and I look to see you again soon! 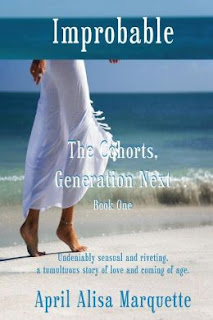 —The only thing was...she needed to get him to commit, to her. But how could he, when his mind was always on that slinky, coffee with milk-colored black —girl who needed to move on? What was he doing with her anyway?

Sure, Jeremy had some Negro in him, as Mam-maw, Ashlee’s grandmother called it. But the negroidism was so far back in his family lineage until his genes had probably already rid themselves of the impurity. To Ashlee he sure looked white, and was...he...gorgeous! Ah, and he had been born into wealth, Ashlee remembered. That was most important.

So time to get to work, time to plan, because she had to make her new name, her new tits, her new hair color, and her whitened teeth pay off. She didn’t care what she had to do.

Heck, to get to this point, she had already done so much. She had even endured what she felt was too much. She’d given up her family, and her friends. She’d also left her home, so she was willing to go the distance. At this point, she would readily destroy any ‘obstacle’ that got in her way, and that included Gemma Janelle.

Ashlee felt she would do so because there was no way that she would go back to living in the shadow of the mountains. No freaking way.